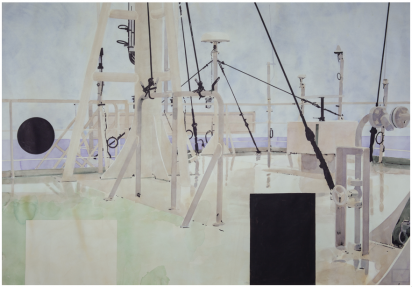 Saint-Malo born and bred, Yvan Salomone was naturally drawn to the maritime world. With the tightening of security over the past years, port zones have now become off-limits to the public and artists alike.

It’s a regret that the watercolourist expressed during a conversation with Marfret chairman Raymond Vidil, whose artistic bent prompted him to offer the artist the long-haul passage from Northern Europe to Brazil and French Guiana.

During the 42 days of an extraordinary voyage, landlubber Yvan Salomone shared the daily lives of the 22 seamen whose job it is to keep the 22,000 DWT Marfret Guyane shipshape and running on schedule.

The encounter between the artist and his world and the cargo ship and its crew, with the ocean as a backcloth, created a palette of unique emotions, an explosion of colours and feelings, personal and artistic vibes that leave no-one  untouched.

“I tried to see every sunrise and sunset while I was at sea. In a single day, the second officer and I saw two green rays,” enthuses Salomone, who never once was bored.

To keep himself disciplined, the artist planned his days. The mornings would be spent on deck or on the bridge contemplating every detail as he composed his shots. Navigation? An exercise full of paradoxes and contrasts. “The ship, that noisy, bellowing mass of steel, traverses the sphere of colours in such a delicate way. A sphere of 360°, where the sky dips to kiss the sea, and in which the shades and tones change with the different ocean zones and weather. I discovered the South Seas, transparency, the colour blue, shades of magenta and purple…,” he adds, his retinas etched for eternity.

The fury of the elements and storms fascinate him, his inner exhilaration contrasting with the palpable tension on board.

In the evenings, Salomone would descend into the bowels of the ship. It was a fantastic and dazzling experience for the artist, whose brush has always depicted with detail the mechanical elements of man-made objects. “The chief engineer, Dima, allowed me in the engine room when they were servicing the engine. I was stunned by the con-rod, a piece of stainless steel, three metres long and perfectly shaped, bathed in engine oil. I was in front of something very precious, the beating heart of a ship. It was a moving experience, a kind of inner journey, something organic,” recalls the artist, whose emotion reveals the intimate feelings of the seamen, buried beneath the reserve their jobs impose. The external environment brings out the best out in the vessel as it constantly battles against the elements and corrosion. Salomone rarely left the ship, and when he did re-join terra firma at Fortaleza or Degrad-des-Cannes, he still had the impression in the port zones that he was afloat. “Each time I ventured away from the ports, I couldn’t wait to get back to the ship,” adds the artist, whose work focuses on cargo ships. In fact, he recently finished the editing of a feature-length documentary. “It’s my second try at film-making,” points out Salomone, whose work has been on display at the Mucem’s Galerie de la Méditerranée since 2016. Photos, videos and paintings… the artist is back in his studio once again with his brushes. His considerable artistic work will be the subject of a Marfret exhibition in 2020. Salomone concludes, “I don’t see ships the way I used to. I now know what goes on in the fo’c’sle, engine room and hold.”