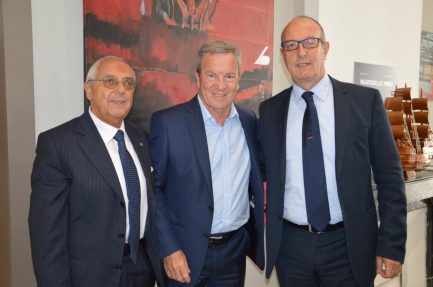 At a time when a man’s word was his bond, Marfret founder Claude Vidil and Italian agent Maurizio Panariello set out on a long journey of collaboration with a simple handshake. The AEM agency, owned by Marfret for almost 30 years now, has just celebrated  the 40th anniversary of its founding in Genoa on 13th December, 1979,

“Forty years is a lifetime – and three generations of Marfret owners! Claude Vidil gave me his complete trust. We shook hands and, over the years, have built an exceptional and fraternal relationship,” recounts branch manager Maurizio Panariello, his voice quavering.

His knowing looks in the direction of the Vidil children and grandchildren, Raymond, Bernard and Guillaume, who has taken over as managing director of Marfret, underlines the closeness of this Franco-Italian partnership. AEM is much more than just a subsidiary; the friendship surpasses mere capitalistic ties.

A graduate of the École Navale, the young Maurizio began his career first at Italia Line and then on Costa Line’s Central America service. In 1979, he set up the Agence Européenne Maritime (AEM) in Genoa, with Swiss financial backing, to develop the “Transgabonaise”, Gabon’s railway line.

“It was at that time that I contacted Claude Vidil, who was already operating a service to Canada and one to the West Indies. We began by developing business with Venezuela, through an agreement signed with forwarders Merzario. In 1986, we jointly launched the first direct service between the Mediterranean and Montreal. And our first vessel, the Peter Wesh, serving the West Indies from Genoa proved to be a huge success. Marfret purchased AEM in 1990 and from then on we concentrated on regular services,” recalls Panariello.

AEM is Marfret’s representative in Italy, selling its MedCar and South America services. “Italy brings in reefers from French Guiana. We also have close trading ties with Mexico and Houston, traffic volumes with Genoa being considerable,” he adds. “We arrange pre- and onward carriage by road and rail for French and Italian forwarders.” A member of Assagenti and ASAMAR, AEM employs 14 people in its offices in Genoa and Livorno.