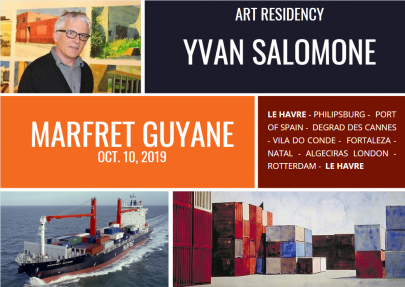 The artist Yvan Salomone boarded the Marfret Guyane on October 10, for a 42-day trip. A double crossing of the Atlantic, to meet our crews aboard and our teams ashore, to the rhythm of the ship’s calls. Welcome on board!

Yvan Salomone is a French painter, born in 1957 in Saint-Malo, where he lives and works.

Since 1991, he has been producing watercolours in the same 133cm x 97cm format. His work initially focused on port landscapes in Dunkirk, Le Havre, Rotterdam, Dakar, New York, Shanghai, etc. but after port areas were closed to the public in the early 2000s, his scope opened to other places, such as industrial areas. His residency within our company will reopen the doors of the maritime and port universe to him.

The singularity of his work lies in the encounter between the technique of water colour, which at first sight could be described as outdated and nostalgic, and a highly contemporary approach.

Some of his paintings are currently being presented at the Mucem* in Marseille, as part of the exhibition Connectivités, a history of the Mediterranean’s great port cities.

Since 2007, Marfret has welcomed an artist in residence every two years on land, in its offices and at sea on board its ships. For Marfret, the residence is a meeting between the artist and our resident teams and our crews.

The work created from the residence is then exhibited and presented at the port community chosen by Marfret and the artist, from amongst the places included in the ship’s itinerary. Yvan Salomone’s work will be exhibited in French Guiana where our ships have been calling every week for over 35 years. Like every Marfret residency, it will also result in the publication of a catalogue and calendar.

This residency will allow Yvan Salomone to discover a world still full of mystery for the layman, an adventure he has chosen not only to paint – he will make 13 water colours – but also to film, which will be a first for the artist, drawing his inspiration from Allan Sekula’s work.

With this art residency, Marfret is pursuing its desire to open its activity to other horizons and to offer our staff and port communities a new approach to our profession, through the eye of the artist.

* Museum of the civilizations of Europe end the Mediterranean