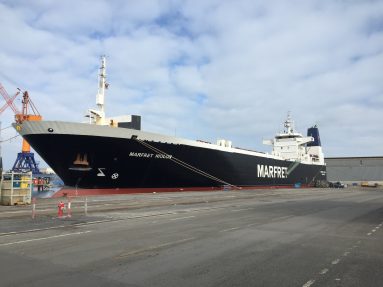 Launched in the spring of 2020, Marfret’s MPV service allows the seamless shipment of tractors, yachts, buses and conventional and dangerous cargoes.

Operated using the 1212 lm-capacity Marfret Niolon, the service has a rotation time of 42 days. It connects in the West Indies with Marfret’s Ferrymar service, operated with the Marin.

At its beginnings in March 2020, the MPV line originally ran between Le Havre and the West Indies, before French Guiana was added to the route.

“It’s a game-changer for French Guiana, which until now only received ro-ro traffic in transhipment via Pointe-à-Pitre. The clients are delighted at having a direct, multipurpose service on set days,” emphasizes Marfret managing director Guillaume Vidil. Vidil is pleased with the return to Marfret’s roots symbolized by the MPV service, the company having always maintained its interest in general cargoes and special projects.

After spending time in dry dock at Damen Shipyards in Dunkirk, the Marfret Niolon took to the seas again for another five-year stint. It is now fitted with a ballast water treatment system that ensures better protection for marine ecosytems.

The “multipurpose vessel” (MPV) service is continuing to expand: after leaving le Havre, the Marfret Niolon made its maiden port call at Antwerp on 12th March before heading to Pointe-à-Pitre, Fort-de-France and then south to call at Dégrad-des-Cannes.

In the Belgian port, the Marfret Niolon berths at the Nova Natie terminal, the break bulk specialist being equipped with a heavy-lift crane and 190,000-m2 warehouse.