Accueil > News > Highlighted > When words take to the seas… 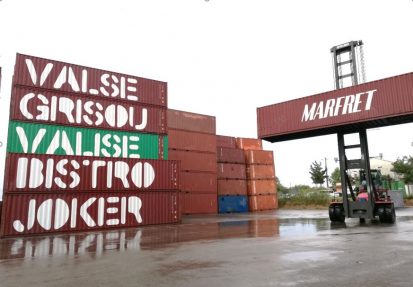 Ship-owner. Our job isn’t just moving goods and passengers … Words, ideas surreptitiously embark on long voyages, like stowaways. Thus, over the centuries, with the migrations and geopolitical events, they have travelled invisibly between the five continents to enrich our languages.

Words from afar that we use every day; they account for almost one third of the 30,000 entries in the French dictionary . To examine the etymology of words, artist Alexandre Perigot takes us beyond the words themselves, with his work entitled “Amiral Doubitchou”, an ephemeral exhibition whose title is nothing more than a juxtaposition of two words of foreign origin. The second of these refers to a fictional Bulgarian cake made famous by the French comedy film “Le Père Noël est une Ordure”.

The exhibition stretches over more than 200 metres of the Digue du Large, the breakwater protecting Marseille’s Eastern Harbour, where our company’s vessels dock every week. Each of the 38 words in the compendium has been neatly painted on the side of a 40’ dry container loaned to Alexandre Perigot by Marfret’s logistics department, which manages a fleet of 20,000 containers.

The standardized steel box was the artist’s natural choice as a canvas, since it is a vector of international trade. This mode of unitising cargoes has flooded the planet. It can be found in the avocado orchards of Peru, porcelain factories of Italy and in the hundred or so ports called at by Marfret’s regular services across the world.

Painted on one side, these “container-words” will remain stacked side-by-side from June to October, 2019, and can be viewed by residents and tourists alike from the MuCem , Pharo Palace, the Silo, Terrasses du Port and the road viaduct, as well as by sailors and passengers leaving the port bound for Corsica, Radés, Algiers or La Goulette.

Amiral (admiral), cacao (cocoa), acajou (mahogany), digue (breakwater), tarif (tariff)… as many words as we have destinations. This exhibition is being held at a time when Marfret, while asserting its Provençal roots, once again finds itself at the heart of world trade with its new MedCar service linking the Mediterranean and Caribbean now extended to ports in Mexico and the United States.

There are the cargoes, of course, but also the men and women from all these countries who are tasked with representing Marfret, all of whom we have had the pleasure of welcoming to the company’s headquarters.

A profusion of cultures, an abundance of warmth arrived from Latin America, Spain, the French West Indies… In November, the container-words will re-join the Marfret fleet and take their turn sailing under the company’s colours. Thus, words will continue to travel and reach out to those in search of meaning.