Accueil > News > Container liner shipping > With an agency in Saint-Martin, Marfret bolsters its presence in the West Indies 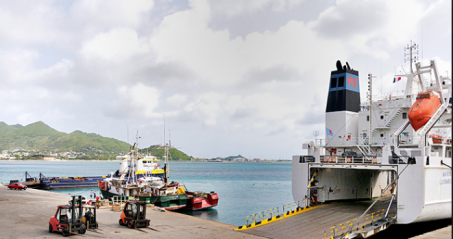 With twenty years of experience, Marfret’s commitment to serving the French islands is once again confirmed with the opening, in July 2018, of a dedicated agency in Saint-Martin. The company, which arrived in Saint-Martin only a few hours after Hurricane Irma to provide first aid, is constantly supporting the island’s reconstruction and development.

Marfret has new ambitions for this Caribbean island. “Saint-Martin meets all the criteria for a major Marfret deployment. This French island matches the niche markets in which we are traditionally positioned,” says Guillaume Vidil, Managing Director of Marfret.

Represented by a shipping agent for some twenty years, Marfret opened its own agency in July 2018 in Galisbay, on the French side of the port of Marigot.

“Our teams are set to grow within this agency. Two regular Marfret lines serve the island of Saint-Martin. The French Guiana service, from Northern Europe, makes one fixed-day weekly stopover in Phillipsburg, in the Dutch part of the island and the MedCar line, coming from Southern Europe, serves Marigot via a stopover at Pointe-à-Pitre,” explains Bruno Julius, head of the Marfret branches in Pointe-à-Pitre and Saint-Martin.

Bruno, also line manager of Ferrymar’s, recalls the extension in 2013 of the inter-island services to Saint-Barthélemy and Saint-Martin. “Ferrymar is a popular brand. The regular presence of the “Marin”, a 900 linear metre Ro-Ro vessel, is a demonstration of our commitment to the island. The West Indies are at the heart of Marfret’s development strategy,” he adds.

When, in 2017, the island was devastated by Hurricane Irma, Marfret provided first aid to the affected populations. Irma caused the deaths of 11 people in Saint Maarten. The damage was colossal, in excess one billion euros. “In October 2017, we delivered 30 bungalows donated by the Algerian government,” Ariane Roffe-Gallinaro recalls. The sales manager for the Caribbean line notes an increase in volumes exiting Mediterranean ports. “After the first aid cargo, we transported materials for the reconstruction of houses: tiles, cement, sheet metal, sanitary facilities, welded mesh, etc. These types of volumes have gradually been transformed into regular traffic,” observes Bruno Julius.

More than a year after the disaster, life is gradually returning to normal in the island. The trauma fades and tourists come back to discover this paradise in the West Indies. “We are increasingly carrying yachts loaded on flat rack units on our ships from Italy and Spain. General cargo traffic is also on the rise, a sign of the recovery of activity on the island. With its own agency, Saint-Martin will undoubtedly appear more on Marfret’s radar screens. “We call at two ports on the island with two services. Synergies are possible,” says Charlotte Rosa, MedCar Line Manager.