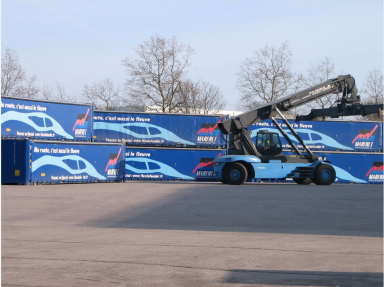 Traditionally, SOMAP’s groupage warehousing services were export-oriented, but with the gradual decline of shipping line port calls at Rouen, the future for this business is uncertain.   The phenomenon can only worsen, with many of the major forwarders also leaving the port. Xavier Rose adds, “We need to prepare for this change and provide Rouen with new prospects and new energy. With its established service between Rouen and Le Havre, Fluviofeeder has made Rouen its logistics hub, providing a wide range of services such as on-demand warehousing, gas measurement for containers and container repairs.” The five warehouses, each covering between 4000 and 5000m², have found a new lease of life as overflow storage space for the company’s clients. For example, since the purchase of Tati, Gifi has been reallocating stock among its stores in Paris and Normandy and is using one of the five warehouses for reverse logistics.

“We need to move from being a terminal warehouse to a distribution warehouse for mass storage. To do this, we have come up with a low-cost, overflow offer for logistics companies, primarily for import traffics. At the same time, we need to provide the port with a new generation of bonded distribution warehouses for wholesalers to store goods prior to their release onto the retail market,” says Xavier Rose. In fact FFA has already applied to French customs to become an authorized economic operator (AEO).