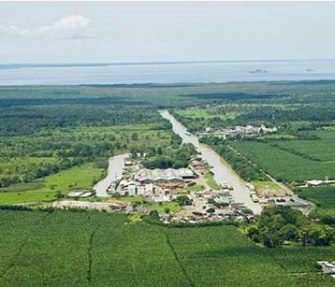 Convinced of the geographic advantages of Turbo, the natural port choice for the export of fruits produced in the Medellin area, Marfret made its first port call there back in November, 2014. Since then, the company has continuously expanded its service linking the Mediterranean to the Caribbean.

The choice of Turbo, located on the Gulf of Urabà, was strategic for Marfret in two respects. Firstly, being the closest port to the Panama Canal on the Atlantic side, the canal’s new lock system put it firmly on the main maritime trading routes.

“By using Turbo, exporters save 25% on their transport costs compared to Buenaventura and at the same time avoid transiting via the Panama Canal,” points out Celine Douvenou, head of the MedCar line’s reefer department.

The other advantage highlighted by Marfret is the customs arrangements at Turbo. The new customs regulations in effect in Colombia since March, 2017 and intended to combat smuggling have produced beneficial results. Administrative procedures have been speeded up and Turbo has become more competitive.

“Stuffing is carried out in the port of loading under the control of the Colombian authorities. Long-known for its exports of bananas, Colombia is now increasingly present in the avocado market,” adds Céline Douvenou. Marfret offers one of the best transit times to Europe, taking only 12 days to reach Algeciras and 15 to Livorno.

Transport efficiency from end to end. On the landward side, Turbo has benefitted from the government’s “Highways to Prosperity” plan, with €800M being invested in a country-wide upgraded road network. Road hauliers travel the 340km that separate Medellin and Turbo along the A62 main road, thus reducing pre-shipment times. In Colombia, the main factor is not distance but actual travel time.