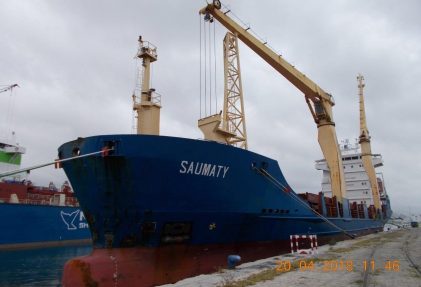 Marfret recently acquired a new ship, the Sina -renamed Saumaty– which will operate between Marseille and Algiers , replacing the Waddens. Focus on this newcomer to the fleet.

Prior to a scheduled dry-docking, the 5600-t deadweight Sina has joined the Marfret fleet. Continuing the company tradition, the ship has been renamed Saumaty after one of Marseille’s many “calanques”, this time one located in the north of the city and home to its fishing fleet. Already, in the 80s, one of the company’s previous ships bore the name of this delightful district, part of l’Estaque, often the subject of Cézanne’s paintings.

Built in China in 2003, the same year as the Marfret Durande, the 100m-long vessel is equipped with two 40-tonne cranes and has a capacity of 511 TEUs. The Saumaty has therefore taken over from the Waddens on Marfret’s weekly service on May 24th, with departures every Friday from Marseille, arriving Sunday in Algiers.

After six long years of loyal service on the North Africa line, the 35 year-old Waddens has been returned to its owners. The choice was either to buy or to charter, an age-old question that depends on a multitude of parameters.

Marfret considered it an opportune moment to enter ownership once again in this long-established and local market, ten years after the Méjean, another ship named after a calanque. The task of finding the rare gem was entrusted to Broker Shipping, Marfret’s ship brokering subsidiary.