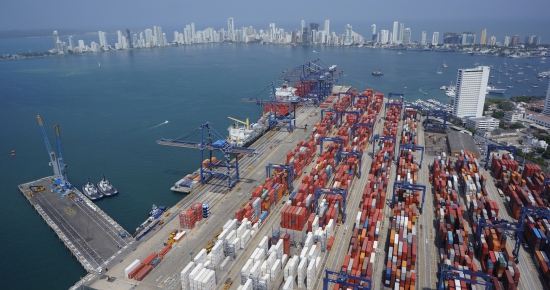 Colombia has a privileged geographical position standing between the Caribbean and the Pacific ocean and political stability, with a population of nearly 50 million and a GDP of 283 billion dollars .With annual growth rate of 2%, Colombia´s trade balance by the end of 2016 was -11,5 billion dollars, with 42,8 billion dollars’ worth of imports and 31,3 worth of exports. Its main exports include oil, coal, flowers, coffee and bananas.

SPRC offers port and logistic services to passenger and cargo ships through its terminals SPRC and Contecar. SPRC has 8 STS port cranes and twinlift capacity and 3 mobile cranes with 100 tons capacity. It has an area of 25 hectares with more than 30.000 container storage cells with 6m altitude. It counts with 32 electric RTG cranes.
SPRC connects with 750 ports in 150 countries around the globe and attends 25 maritime lines. It is the principal exporting port in Colombia and the 5th largest in Latin America. Currently it has the capacity to move 3 million TEU and hopes to increase to 5.2 million at the end of 2017 through its terminals SPRC and Contecar.
Organización Puerto de Cartagena

Agencia Marítima Internacional AMI was founded 40 years ago and has been proud agents of Marfret in Colombia for 25 years. Ami has built a valuable network of local, strategic partners over the years. Its goal has been to align the interests of the shipper and consignee with Marfret at every stage of the process.