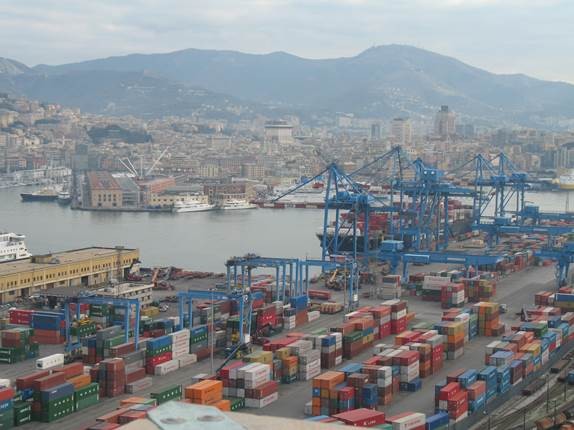 Italy's GDP grew by 0.4% in the second quarter compared to the previous year, and 1.5% year-on-year, its strongest pace since 2011. This acceleration is good news for the country, which had experienced two years recession before returning to a very small growth in 2014 (+0.1).
The recovery started with exports, then consumption increased and investments are now growing.

The Port of Genoa has successfully taken advantage of its strategic geographical location between Northern Italy and Southern Europe, upon its experience inherited from an age-long seafaring tradition, to provide a high service quality to all users.

The Port of Genoa features a 22-kilometre coastline from the old port area to the new Voltri port. Genoa is a multi-service port which boasts 21 specialized terminals in all the key commodity sectors : container, general cargo, perishable goods, steel,  forest products, bulk, petroleum products and cruise passengers. Today Genoa ranks as the firstr port in Italy either in terms of cargo or in terms of passengers.

Genoa Port Terminal is equipped with :

AEM – Agenzie Europee Marittime – was founded in 1979 and started representing the first vessel of the Marseille Fret “Peter Wash” directed to the French Antilles in 1980. Since 1992 AEM is a 100% Marfret property and started operating as exclusive Marfret agent in Italy and consequently opened a branch in Leghorn in order to be present either in Genoa or in Leghorn.