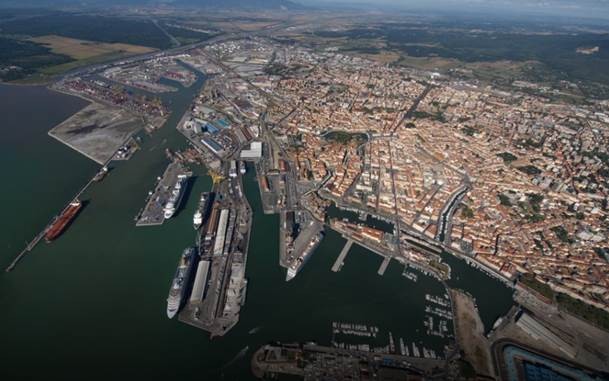 Italy's GDP grew by 0.4% in the second quarter compared to the previous year, and 1.5% year-on-year, its strongest pace since 2011. This acceleration is good news for the country, which had experienced two years recession before returning to a very small growth in 2014 (+0.1).
The recovery started with exports, then consumption increased and investments are now growing.

The Port of Leghorn is the third biggest western port in Italy. Leghorn is a multi-service port which boasts 20 specialized terminals in all the key commodity sectors such as container, general cargo, Ro-Ro, petroleum products and cruise passengers.  The Port of Leghorn features a global  12-kilometre quay length, 90 berths and a 2.500.000 m2 port area.

Marfret is currently working with the Terminal Darsena Toscanal which is equipped with:

AEM – Agenzie Europee Marittime – was founded in 1979 and started representing the first vessel of the Marseille Fret “Peter Wash” directed to the French Antilles in 1980. Since 1992 AEM is a 100% Marfret property and started operating as exclusive Marfret agent in Italy and consequently opened a branch in Leghorn in order to be present either in Genoa or in Leghorn.