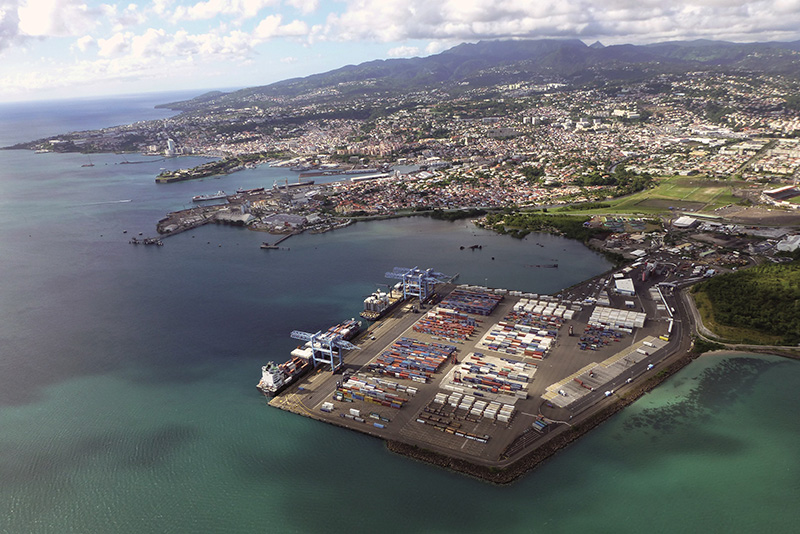 The Grand Port Maritime of Martinique (GPMLM) is a national public institution since 1 January 2013 following the law of 22 February 2012 on port reform overseas.
The GPMLM is owner and manager of the Fort de France Port (since 2013) and the Port of Bellefontaine (since 2014). It is administered by a Supervisory Board and a Management Board, and also has a Development Board.
Its accessibility is one of its major assets. Protected from the swell and wind by its geographical position on the Caribbean coast, the port of Fort de France anchored in the heart of the city "capital" extends from East to West on 2.7 kms of quays on more than 30 hectares of land -pleins.

The Port of Fort-de-France has developed a master plan of development that allowed it to sectorize its spaces according to the type of goods and the profile of the vessels:
- the Pointe des Grives site is dedicated to the container business. The terminal has 16 hectares of land, a linear platform of 460 meters for a draft of 14 meters. It is equipped with 3 overpanamax gantries and 14 rider trolleys.
In 2015, the container business resulted in 159,474 TEUs being processed. At the rate of 920 000 tons imported, the goods received, most of them consumer goods, are dry or chilled. Export which represented 450,000 tons in 2015; is based mainly on bananas at 280 000 tonnes per year.
- the hydro-base site at Pointe des Carrières receives vessels carrying solid bulks and liquids.This site is also dedicated to the reception of carriers and RORO.
- the sites of Quai de la Tourelles and Pointe Simon wharf accommodate cruise ships.
- the Radoub Basin, an area entirely dedicated to ship repair, can accommodate vessels up to 20,000 gross tons for 180m x 23.5m x 7.6m.

The vast majority of goods come from metropolitan France (80%), the rest being distributed between Europe, Guadeloupe and the Caribbean.

In Martinique, MARFRET is represented by a secondary establishment created in October 2001: MARFRET Fort de France.
The agency is made up of 8 people who ensure the link between the importers / loaders and the goods transported on the three maritime services of MARFRET which call at Martinique: the lines North Antilles, Mediterranean Caraibes, Ferrymar.