Accueil > Newsletter > Return of a giant excavator to La Rochelle 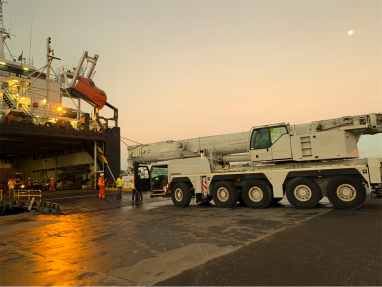 After completion of the demolition of the Gabarre tower blocks in Pointe-à-Pitre during the summer of 2021, the giant excavator used in flattening the three concrete buildings left Guadeloupe mid-February 2022 bound for La Rochelle. The machine was shipped on the Marfret Niolon, specially reinforced to carry such a heavy consignment. Insight into a daunting task, requiring special expertise and engineering prowess.

The Gabarre tower blocks, built in the 70s and used as a landmark for local fishermen, are no more… As part of an extensive urban regeneration project, the three concrete and steel buildings were demolished in 2021. To carry out the €34.6M demolition project, Avenir Déconstruction called on the services of an excavator of gigantic dimensions: a Liebherr 9150R fitted with a 76m-long arm, with a 28m reach, and weighing 315 tonnes. Shipped out as lolo (lift-on, lift-off) cargo from the UK, forwarding agent Safir & Melon, part of Léon Vincent, opted for a safer, horizontal-load roro option for its return to France.

15-day journey, one year of preparations

Between the first technical studies carried out by Laurence Gloaguen and the vessel’s sailing from Pointe-à-Pitre on 14th February 2022, the entire operation took almost a year. The machine was shipped on the Marfret Niolon, which operates on the MPV service.

Guillaume Vidil and Marfret’s Le Havre branch manager Martial Bienvenu were on hand at Jarry port to witness the spectacular loading process, expertly carried out by the stevedores of Soguama, a handling company owned by Marfret, under the watchful eye of Bruno Julius, manager of Marfret’s Guadeloupe agency. The delicate operation required input from Marfret staff in London, Guadeloupe, Le Havre and Marseille to calculate the optimal way to spread the load and put in place the handling capacities required to ensure the safe transport of all the behemoth’s components once disassembled.

“Four steel plates were specially designed and welded onto the ship’s garage deck to evenly spread the load of the excavator body’s 89.5 tonnes on four hydraulic jacks. The body was loaded on board on a 12-axle trailer and then transferred onto a 100-tonne capacity MAFI roll trailer before being secured on the four jacks. Plywood was placed between the jacks and the steel plates. The tracks, which weighed 49.5 tonnes apiece, were placed on roll trailers,” explains Martial Bienvenu. The complex operation was carried out with the help of the demolition company, operators of the excavator.

The multi-purpose MPV service, which specializes in roro traffic, has its own out-of-gauge handling equipment. The service operates between Le Havre and Pointe-à-Pitre (connection hub for the Ferrymar service to Fort-de-France, Marigot and Gustavia) via Antwerp and Degrad-des-Cannes, with a rotation time of 42 days. “If the volume of traffic warrants it, our flexibility allows us to add a port call,” points out Martial Bienvenu, who has replaced Emmanuel Bohec at Le Havre. After 15 days at sea, the Marfret Niolon docked at La Rochelle on 1st March to offload its cargo, before resuming normal operations…