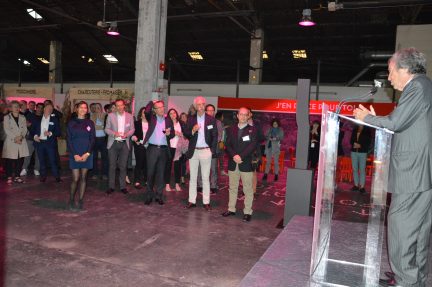 Clients, co-workers, suppliers, representatives of local government departments and ship service providers were all at the J1 in Marseille on May 3rd last. It was in this legendary, memory-filled dockside warehouse that Marfret founders Raymond and Bernard Vidil chose to celebrate the company’s 30 years of scheduled services. The event, which was combined with an exclusive tour of the maritime-themed installation by artist JR entitled “Amor Fati”, provided an opportunity to announce the gradual handover to the third generation in the person of Guillaume Vidil.

The J1* warehouse was the venue on 3rd May last for a pleasant, festive evening, at the crossroads of  culture and seafaring, organized for around a hundred guests from France and Mediterranean countries served by Marfret.

As sponsor of the Amor Fati project, the company had privatized the last of the “J” waterfront warehouses, an iconic vestige of Marseille’s maritime past, to celebrate its 30th anniversary. “The tramp shipping started by my father in 1951 was not enough to keep the business going. That was when we set up Marfret, with the focus on regular shipping services,” explains Marfret chairman Raymond Vidil.

After Marseille Provence 2013, Raymond Vidil was the instigator of MP 2018, an association he chairs and which is dedicated to continuing the region’s cultural momentum, with 200 events scheduled this year under the banner of love.

In just a few years, the young graffitist from the Paris suburbs, JR, has become an internationally-renowned artist famous for his portraits of anonymous people placarded on city walls. As a birthday treat, guests were invited to take a private, guided tour of Amor Fati, the MP2018 flagship exhibition held from 14th March to 13th May. The installation takes the visitor by surprise, inviting us to embark on an introspective journey that plays with contrasts -the infinitely big to the infinitesimally small- shadow and light and providing a unique interpretation of maritime perambulation. “Marfret used this warehouse 40 years ago for its export shipments to Algeria. We could tell what the goods were just by the smell,” remembers Raymond Vidil, who reminds that it’s one of the last times the building will be open to the public in its present form.

Family-owned and a new generation

Recalling the story of Marfret and the reasons for its success, Raymond Vidil underlined the value being family-owned, a fact that has never hampered its capacity to invest! This is demonstrated by the announcement of the acquisition of two new container ships. One of these, the Saumaty, will enter service on 24th May next on the Marseille-Algiers route, the first manifests for which were typed out back in 1951! Paying tribute to the work carried out by its Algerian partner Mageco, which manages the Algiers inland port, Raymond Vidil focussed on the quality of the human relationships developed over the years by his colleagues.

As the years go past at ever-increasing speed, the two brothers have decided to take more of a back seat, with Guillaume Vidil having been groomed to take the helm for a few years already. Starting out as seaman, before becoming MedCar line manager and managing director of the Fluvio-Feeder fleet and manning division, the young man steadily earned the stripes he needs to take on his new responsibilities. “We are stepping back from the daily business while keeping a watchful eye from the boardroom,” declares Raymond Vidil. The crew change is underway…

* Warehouses originally built to store goods under cover on the quayside.