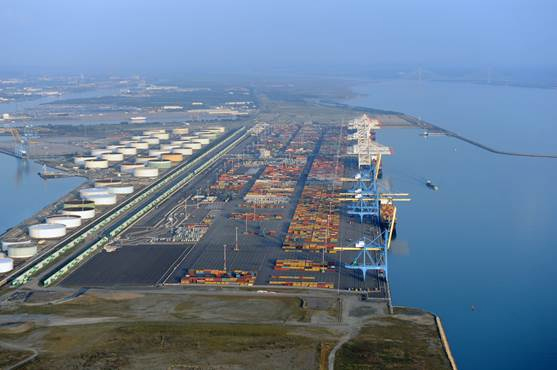 Accessibility 24 hours a day, 7 days a week, without any major tidal constraint, makes it possible to transport between 65 and 80 million tons of goods each year through the port of Le Havre, which ranks first in France for containers thanks to its 2.6 millions of Teus. This 5-hundred-year-old port is backed by a 10,000-hectare industrial-port area that offers a vast logistical space to serve as a hinterland whose spine is the Seine axis.
In total there are no less than 6,000 stopovers per year, including nearly 400 container ships of more than 10,000 Teu, 650 oil tankers and other chemical tankers but also nearly 150 cruise ships that punctuate the daily lives of 31,000 direct jobs and indirect effects of the port community of Le Havre.

35 km of wharves with several terminals in deep water receive both the giants of the container that bulk carriers and other self-propelled. Today, Port 2000 totals 10 berths equipped with 21 gantries, all dedicated to container traffic; two of our services climb at the Terminal de France (GMP) while our NASP service moor at the Quai des Amériques in the historic port (2 berths and 4 portals). Numerous river and rail connections make terminal access more fluid.

A large part of our freight is linked to large-scale distribution, with many consolidation and consolidation containers, which explains why two thirds of our export flows leave the port area of Le Havre. However, building materials, capital goods, vehicles, machinery and other manufactured goods are regularly found on our ships. Not to mention the '' special packages '' - such as helicopters or handling equipment - that enrich our shipments as the growing share of products (food and pharmaceuticals) traveling under controlled temperature.

Open since 2003, Marfret agency in Le Havre now counts of 18 people. Three major maritime routes Marfret (Antilles, Guyana-North Brazil and NASP) call every week in Le Havre and serve the French overseas departments and territories, but also other destinations such as the US East Coast, Colombia, ANZ, .. Our river service "Fluvio-Feeder" connects the Ile de France, Rouen and Le Havre several times a week. This is a total of more than 46 000 Teus including a third of transhipment, which were treated by the agency in 2016. But beyond the sea freight, it is a whole set of benefits which can be proposed to you: stuffing, pre / post routings, customs, insurance, ...