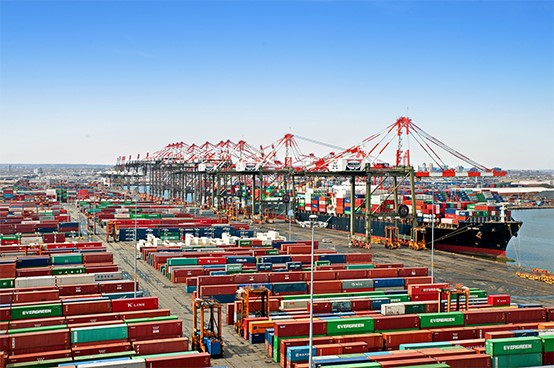 The U.S. economy maintains its powerhouse status through a combination of characteristics. The country has access to abundant natural resources and a sophisticated physical infrastructure. It also has a large, well-educated and productive workforce. Moreover, the physical and human capital is fully leveraged in a free-market and business-oriented environment. The government and the people of the United States both contribute to this unique economic environment. The government provides political stability, a functional legal system, and a regulatory structure that allow the economy to flourish. The general population, including a diversity of immigrants, brings a solid work ethic, as well as a sense of entrepreneurship and risk taking to the mix. Economic growth in the United States is constantly being driven forward by ongoing innovation, research and development as well as capital investment.

Maher Terminals has ample deep water berths, cranes, equipment, and labor to minimize vessel stay in port. It utilizes 19 container cranes which are all Post Panamax or greater. The terminal stretches over 450 acres and has over 1200 reefer plugs. It is the largest terminal within the Port of New York and New Jersey.

Maher Terminals is strategically located to ensure swift container transfers between vessel and rail. It is immediately adjacent to ExpressRail Elizabeth (EMT) which has 18 working tracks totaling 43,000 linear FT. EMT is served by both the CSX and Norfolk Southern Railroads and are able to offer service throughout the U.S. including connections with railroads servicing the USWC.

MARFRET IN THE UNITED STATES

Marfret USA, Inc. is a wholly owned subsidiary of Compagnie Maritime Marfret and acts in the capacity of an agent. We have represented Marfret since January 1996 and are headquartered in Norfolk, Virginia. Marfret USA handles all Marfret matters in North America. The USA staff is highly experienced with both refrigerated and dry container cargo, serving the Americas, Europe, and Oceania. Excellent customer service and 24 hour accessibility is how Marfret USA differentiates itself from the larger carriers.