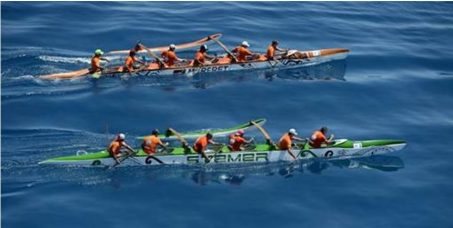 A Va’a in Marfret’s colours in New Caledonian waters

The 9th edition of the Te Aito Taratoni took place on May 11th. The Va’as, also known as Polynesian Canoes, or Tahitian Pirogues, competed against each other on the turquoise waters of the Caledonian Lagoon punctuated throughout the day by various events.

Ever since the inaugural event Marfret has sponsored the Club des Piroguiers du Mont Dore, who are the organisers of the Caledonian Te Aito, by transporting equipment free of charge from Tahiti to Noumea on its NASP line container vessels.

Nicholas Dabin, President of the club, said “The support provided by Marfret helps to increase the reputation of our competition across the Pacific region and to acquire the best available equipment from Tahitian manufacturers, which contributes to improving the performance levels of our New Caledonian pirogues”

The Te Aito Taratoni is an increasingly popular and successful event and this year, on May 11th, no less than 150 rowers from New Caledonia (of course), Tahiti, Australia and New Zealand were competing.

This competition is one part of the Te Aito Pacific Tour which will take in events in Australia and New Zealand prior to the big finale race in Tahiti in July.