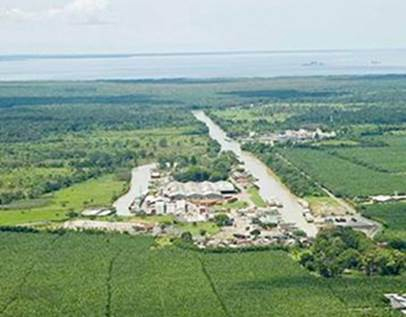 Colombia has a privileged geographical position standing between the Caribbean and the Pacific ocean and political stability, with a population of nearly 50 million and a GDP of 283 billion dollars .With annual growth rate of 2%, Colombia´s trade balance by the end of 2016 was -11,5 billion dollars, with 42,8 billion dollars’ worth of imports and 31,3 worth of exports. Its main exports include oil, coal, flowers, coffee and bananas.
The main commodity from far is the export of fresh Cavendish bananas to the USA & Europe.

Located in the Gulf of Urabá – close to the Panamanian border on the West Atlantic side of Colombia - Turbo is technically not a port but it took his name from the city where maritime and governmental organisations are based. Operations are performed off shore where cargo is loaded and unloaded trough ships’ cranes and with the coordination of barges and tugboats. Marfret’s vessels call at UNIBAN Terminal.

Agencia Marítima Internacional AMI was founded 40 years ago and has been proud agents of Marfret in Colombia for 25 years. Ami has built a valuable network of local, strategic partners over the years. Its goal has been to align the interests of the shipper and consignee with Marfret at every stage of the process.