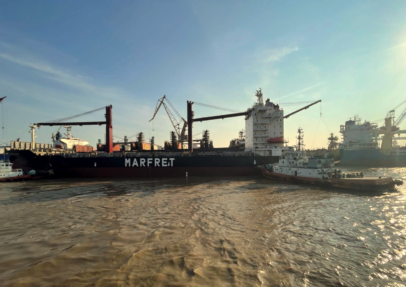 The Marfret Guyane is looking spic and span again after its refit in a Shanghai dry dock over the summer. Marfret took advantage of the refit to carry out work to reduce the ship’s environmental impact.

A ship’s refit is a major event that involves a mandatory in-depth inspection of certain components in order to ensure compliance with classification society standards. Consequently, the 170m-long, 27.2m-wide, 1700-TEU Marfret Guyane had to undergo a thorough and complete overhaul from stem to stern.

Marfret had the work done in a shipyard in Shanghai, a first for the company, who normally use European companies for repairs to its fleet. “The work carried out by Cosco Shipyard Shanghai China was to a high technical standard. The complete overhaul was also an opportunity to implement improvements to the ship’s performance to reduce its environmental footprint,” explains Guillaume Vidil. “We installed a ballast water treatment system. To reduce drag in the water, we also had the hull sandblasted and repainted with a special coating that improves penetration through water, thus reducing fuel consumption and, therefore, pollution,” points out Hugo Becquelin, superintendent in charge of the Marfret Guyane.

All hands on deck

For such a major refit -which included a week in dry dock- to be successfully completed, it was vital to prepare the specifications, carefully select the shipyard and service providers and order the parts in advance. “The Marfret Guyane arrived in Shanghai on 6th July 2022, barely a month after the lockdown had been lifted in the province. Due to the health crisis, it was the first time we had overseen a refit from a distance, with the help of a local agent,” adds Becquelin.

Replacement of hatchway seals, work on the guide rails and the three shipboard cranes, repairs to bulkhead and fuel bunker plating, replacement of ventilation ducts… between 50 and 80 workers from the shipyard and subcontractors (Mac Gregor, Optimarin, Radio Holland, Kawasaki Service Engineer…) worked flat out on the ship for more than a month.

The Marfret Guyane left the Chinese dry dock on 10th August last, ready for another five years of service. The ship is currently in service as part of a new eighteen-month charter contract. Following this successful refit, the sister ship Marfret Marajo could well be heading for China too next year.