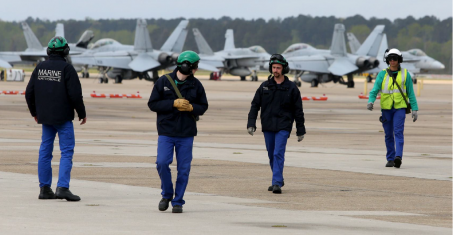 The aircraft carrier Charles de Gaulle on a major technical stop in Toulon until 2019, the on-board air group (GAé) continued its training across the Atlantic thanks to the collaboration of the US Navy. From April 3 to May 27, 2018, nearly 350 GAé sailors joined the Oceana Naval Air Station in Virginia on their own initiative as part of the Chesapeake 2018 mission. SMIS transported all the support equipment from Brest to Norfolk. A look back at the main stages of this first military convoying operation for SMIS bound for the United States.

Familiar with transporting maritime containers, Marfret paid particular attention to those loaded in Brest on 5 and 6 March 2018. In total, approximately 80 containers of support equipment from the airborne group (GAé) and the aircraft carrier Charles de Gaulle were loaded onto the “MPC Nicosia”. This rigged container ship was specially chartered for SMIS by Marfret’ brokerage subsidiary Broker Shipping.

These containers were shipped to the United States as part of the operation called “Chesapeake”. This deployment, which refers to the Battle of Chesapeake Bay, is intended to train French sailors and maintain a high level of interoperability with the US Navy.

In Brest, Laurence Gloaguen, SMIS expert, supervised the loading of the equipment. The “MPC Nicosia” immediately set sail for Norfolk. The unfavorable weather conditions did not slow down the vessel, which had to face successive depressions during the crossing. “We have set up a weather routing so that the ship does not fall behind when crossing the Atlantic,” explains Louis Bonnefon, manager for Marfret’s SMIS dpt. This routing allowed the vessel to reach the American East Coast on time. The MCP “Nicosia” entered Norfolk Naval Air Station at Chambers Field on 22 March, unaccustomed to receiving commercial vessels.

For Marfret USA, a specialist in the transport of commercial containers on Marfret’s NASP service, this military operation was a first. “It was a success thanks to Marfret’s know-how and teamwork around the world. We benefit from the experience of our NASP line as well as the Dunkirk and Rouen agencies. The IT department helped us with the preparation of the documentation and EDI exchanges. Finally, Marfret USA allowed us to prepare the stopover of the “MCP Nicosia” and the unloading at the Norfolk naval base. Marfret has once again demonstrated its reactivity to meet a specific transport need of the Ministry of the Armed Forces and has carried out this transport to the greatest satisfaction of its customer!

Photo: Operation Chesapeake involved 27 French pilots, 3,700 marines and 301 sailors from the GAé and Charles de Gaulle aircraft carrier (mission planners, mechanics, flight deck personnel). As for the pilots, they flew to the United States with their planes, Rafale and E-2C Hawkeye.